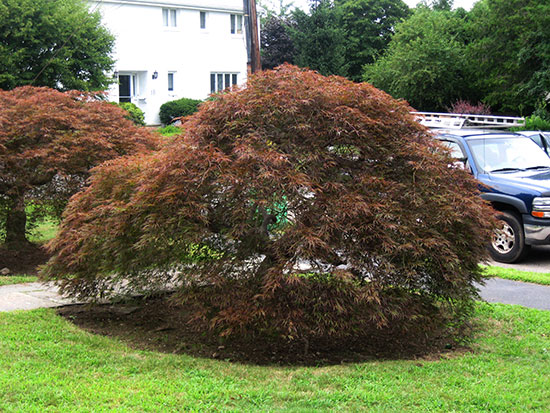 Selective pruning is the technique we use to maintain the plant's natural form and habit. We typically prune ornamental trees up to 25' in height as well as shrubs.

We use horticulturally-correct pruning techniques in order to maintain the plant’s health and habit. Through selective pruning, we enhance the natural form of ornamental trees and shrubs up to 25’ in height by the use of hand-pruning tools.

Shrubs that are overgrown can often be restored to their proper size and scale in the garden through restorative pruning, as opposed to removing them from their location. Even shrubs that have been frequently sheared to within an inch of their life, can often be brought back to their natural, healthy form.

The art or practice of clipping shrubs into ornamental shapes. This specialized treatment is accomplished by using hand pruners, shears and Japanese scissors. One of the few instances where we use shears.

The process of training the branches of a tree or shrub to grow flat against a wall or supported on a lattice. Ideal for those with limited space. Creates an artful/sculptural subject especially in Winter.

These two rhododendrons are out of scale for the size of this house and in dire need of reduction. There was also considerable dead wood to remove, corrective pruning and thinning to allow more light to penetrate the shrubs. Renovational pruning is a process that requires one to five years to accomplish the desired affect depending on the type of plant. Since rhododendrons are moderate growers, the next pruning session will occur in about two years. I will post the results in the near future after the next pruning session where I expect to reduce them again by nearly fifty percent.

These rhododendrons were badly damaged during a construction project where the carpenters crudely tied the branches of the shrubs tightly resulting in many cracked and broken branches. Nearly fifty percent of the plant material had to be removed. In photos 1 and 3, we had finished pruning them and drove a few stakes in the ground to tie back certain branches to train them in order to expediate the recovery. We prune the shrubs at this property once per year by reducing, thinning and doing corrective pruning in order to encourage new growth and flower buds.

This Wisteria is out of control and is about to devour the side of the client's house. Both the Chinese and Japanese form can grow 10 to 20 feet per year, so they often need to be pruned at least two or three times per season and even more often in some cases. It was necessary to cut the vine and pull it from the shutters, down spouts and windows in this case. We reduced the Wisteria to the confines of the supporting trellis.

Photo 1 shows a rose bush that has never been pruned properly, probably 10 years old. Photo 2 is a closeup of the same rose bush that has been lopped back to about 15" to allow for easier access in order to do drastic thinning. Note the density and congestion of stems throughout the bush. "Aah, I can breath!" Photo 3 shows the same bush after drastic thinning. The most desirable stems are preserved to allow for strong, healthy growth that will support clean foliage and flowering. Now there is appropriate spacing between stems to allow for good light penetration and air circulation. To the uninitiated, this looks like outright butchery. My client was concerned that I killed her roses, but as the next photo shows, her worries were soon relieved.

Photo 4 shows the same rose bush taken at the end of July, whereas, the first 3 photos were taken in early May. As you can see from photo 4, roses are extremely resilient and respond well to hard pruning and thinning. From the same property photo 5, taken early April, shows two roses side by side after reduction and thinning. Photo 6 shows the same roses taken in early September, happy and healthy with loads of flower buds to continue flowering well into the fall.

The client wanted this Flowering Crabapple Tree reduced, but it also needed thinning, dead wood removal and corrective pruning of rubbing and crossing branches. Photos 1 and 2 show the reduction and thinning that was executed. Photos 3 and 4 are close up shots of the inner branching. Note how congested the branching is in photo 3 where one can barely see through tree. Photo 4 shows the same close up after pruning. Several large branches were removed and many smaller, poorly positioned branches were removed to allow better air circulation and light penetration. Pruning a neglected tree like this is always a bit like solving a puzzle, but the end result is usually very satisfying.

Photo 1 is hydrangea arborescens before pruning which has become floppy and spread beyond its intended range. Many of the outer canes are bending and need to be removed. Photo 2 shows the same hydrangea after drastic reduction in height as well as diameter of the clump and thinning for appropriate spacing of canes. Many new basal shoots will emerge this season.

Photo 3 is a closeup shot from the other side before pruning. Notice the density of growth and the bent canes. Photo 4 is the same plant after pruning. The remaining canes are strong and straight. It should be noted that hydrangea arborescens will develop flower buds on this season's growth, so they can be pruned back as low as 6" and they will flower beautifully the same season. Some people cut them all the way to the ground, but I believe it's best to keep them at least 6" high for stronger cane development. Hydrangea macrophylla, comprised mainly of lacecap and mophead forms, cannot be pruned in this manner because they develop their flower buds on last year's growth.

Boxwoods are the most commonly used shrubs for topiaries because of their fine texture and ability to tolerate shearing to any form imaginable. We typically shear them twice per year to maintain their form, tweaking them a little with each trimming.